After winning Best Actor in a Musical at The Stage Debut Awards 2019 for Standing at the Sky’s Edge, Adam has continued to gain industry recognition for his roles in BAFTA award winning feature film 1917 and BBC war drama World on Fire.  Most recently, Adam starred as Constable Carrot Ironfoundersson in the BBC America’s action-fantasy series The Watch.

If that wasn’t enough Adam was just named one of the “20 Actors You Need To Know in 2021” by Backstage magazine. 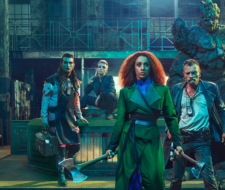